Swingforthefences is winding up another successful season on the track this year and he just added the $165,000 Carl Erskine Trot to his credentials. The sophomore trotting colt stepped up against open trotters in the stakes race Friday, Nov. 5 during a special night of Grand Circuit action at Harrah’s Hoosier Park. 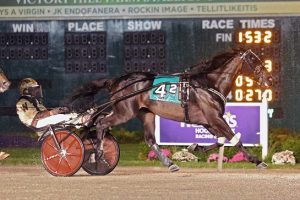 Swingforthefences, shown winning last week at Harrah’s Hoosier Park with Peter Wrenn, is now on a five-race win streak after scoring the title in the Erskine Trot Friday, Nov. 5. Photo by Dean Gillette

Swingforthefences did just that as soon as the gate opened. He went straight to the lead and was ahead by open lengths at the quarter in :28.0. Driver Peter Wrenn was able to catch a breather down the backstretch as they flew by the half in :56.4 and three-quarters in 1:25.2 before trotting home in :28.1 for the gate to wire win in 1:53.3. Platinum As and Tm Tetrick finished one and one-quarter lengths back in second followed by Seven Nation Army and LeWayne Miller for third.

Swingforthefences was the favorite of the field, paying $3.20. The Swan for All gelding is trained by Melanie Wrenn and owned by David McDuffee and L & L Devisser LLC. Concord Stud Farm LLC of New Jersey bred the talented trotter, who has now won 10 of 17 starts in 2021. He is now 13 for 28 lifetime with earnings in excess of $565,000. His career best time of 1:53.1 was taken in the $270,000 Indiana Sires Stakes Final on Hoosier Champions Night in mid October. Swingforthefences is now on a five-race win streak, all stakes victories.

Later in the card, Wrenn also connected with another horse from their stable. Odds On Osiris scored a win in the $22,500 Brad Hanners Memorial. The four-year-old began his journey from the second tier in post 10 and moved along in mid pack as Tivo Hanover and Ricky Macomber Jr. established fractions of :27.1 and :55.4 before being flushed to the outer flow.

In the stretch, Odds On Osiris dug in gamely and paced home in :27.3 for the win in 1:52.1. Tivo Hanover finished second over Bobcat Bay and Tim Tetrick in the three-horse photo.

Odds On Osiris paid $10.00 for the win. Also trained by Melanie Wrenn, he is owned by Odds On Racing and was bred by Merlie Schwartz. It was the third win of 2021 for Odds On Osiris. The son of Rockin Image has 14 wins in 41 starts with earnings of more than $652,000. His career best time remains at 1:493 taken last year as a three-year-old.

Wrenn completed his hat trick in the $105,000 Crossroads of America Trot with Pub Crawl. The Bar Hopping filly was in the mix early, parked at the quarter in :27.1 before finding a spot along the inside and following along to the half in :55.4 and the three-quarters in 1:25.0.

In the stretch, Pub Crawl found the room she needed and was a winner by one and one-half lengths over Material Girl and Trace Tetrick. Queen of All and Yannick Gingras finished third.

Pub Crawl was a bit of a surprise for the win, paying $15.00. She is trained by Julie Miller for owners Marvin and Lynn Katz, Al Libfeld, and Sam Goldband. She was bred by Fair Winds Farm and Steve Jones of New York.