Harrah’s Hoosier Park was the spotlight of harness racing Friday, Sept. 24 featuring some of the top trotters and pacers in the country in the Caesars Trotting Classic and the Hoosier Park Pacing Derby. However, it was several Indiana sired horses who shined through with talent equal to the out of state breds, including Swift Swanda, who won the $115,000 Moni Maker for three-year-old filly trotters early in the card. 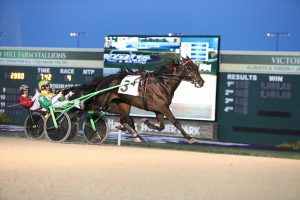 Swift Swanda and Trace Tetrick rally home for the win in the Moni Maker Stakes against open trotting fillies during Community Night at Harrah’s Hoosier Park. Photo by Dean Gillette

Swift Swanda got the cue from driver Trace Tetrick to head to the lead from the start and snagged the top spot at the quarter in :28.1 before being overtaken by Aunt Irene and Dexter Dunn by the half in :57.3. Sitting right at their backs, they followed the duo into the stretch before moving out for the drive home.

A final panel trotted in :27.2 brought Swift Swanda home as the winner by one and one-quarter lengths in 1:54.2. Aunt Irene finished second over Darlene Hanover and Andrew McCarthy for third.

Swift Swanda paid $6.00 for the win. She is trained by Erv Miller for the partnership of Anthony Lombardi and The Kales Company LLC. Lavon Miller bred the Swan for All sophomore who is eight for 11 in 2021 and a winner in four of her last five starts. She now has a bankroll approaching $450,000 lifetime and earned a best mark earlier this year in 1:52.3 in a qualifier.

Another standout Indiana performer on the card was the two-year-old gelding Fulfullnmydestiny. Trained and driven by James Yoder, the Tellitlikeitis freshman scored a four and one-half length victory in 1:50.2 as the favorite of the field, earning his fifth straight win for his connections. He set a new track record earlier this month at Harrah’s Hoosier Park when he eclipsed the 1:50 time barrier with a mile recorded in 1:49.2. Fulfullnmydestiny is owned by Brett Boyd Racing Inc. of Michigan, who also bred the talented two-year-old. Gentle Giant, driven by Trace Tetrick, and Ponda Warrior, driven by Brandon Bates, rounded out the Indiana sired trifecta in the $120,000 Elevation Stakes.

Little Rocket Man and Tellitlikeitis also showed up again in a big way in the evening’s co-featured Hoosier Park Pacing Derby. Facing a field similar to this year’s Dan Patch, Indiana’s two standout older pacers held their own, finishing third and fourth respectively in the 1:49.0 mile. Ocean Rock and Chris Page cored the win by two and one-half lengths over Dan Patch winner Catch the Fire and Scott Zeron in the $182,000 event.

The evening was capped off with the $210,000 Caesars Trotting Classic. Forbidden Trade and Bob McClure turned in a gate to wire effort for the win in 1:52.4, a final panel in :28.2. It’s Academic and Yannick Gingras finished second over Guardian Angel AS and Brian Sears for third.