It was another gate to wire win for the standout trotting filly Swift Swanda in the third leg of Indiana Sires Stakes Wednesday, July 7. The Swan for All daughter scored the win in 1:54.2 with driver Trace Tetrick in the bike. 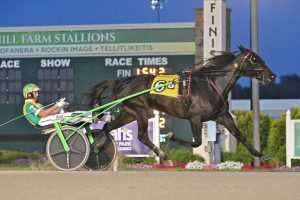 Starting from post six, Swift Swanda went straight for the lead, taking over Dewtiful’s Grace and Verlin Yoder just after the quarter in :28.2. From there, Swift Swanda settled in to set fractions of :57.4 and 1:26.3 before trotting home in :27.4 for the win. Dewtiful’s Grace finished one and three-quarter lengths back in second over Country Girl Charm and LeWayne Miller for third.

Swift Swanda, trained by Erv Miller, is owned by Anthony Lombardi and The Kales Company. Lavon Miller bred the three-year-old who now has four wins in five starts this season. Her career best time was taken in June of 1:53.4. Her career earnings are now in excess of $317,000.

Joining Swift Swanda as an Indiana Sires Stakes winner on the night was Guccio’s Lady and Michael Oosting. Sister Jean and Trace Tetrick set the fractions of :27.4, :57.2 and 1:26.4 to set up a stretch battle.

Four horses were across the track in the stretch with Queen of All and Doug Rideout emerging from the center as the leader. However, Oosting found room along the inside to sneak through and grab the win by a nose over Queen of All. Treasure Gems K and Sam Widger finished third.

Guccio’s Lady was a surprise, paying $19.60 for the win. She is owned and trained by Melvin Schmucker of Florida. The Guccio filly was bred by Paul Johnson. It was her second win of 2021 in eight starts and a new lifetime mark in the effort of 1:55.2.