A handful of Indiana sired horses sold at the annual Tattersalls Winter Mixed Sale at The Meadowlands Monday, Jan. 17 with Swift Swanda fetching the second highest price of the sale. The trotting mare brought $240,000 through the ring and is headed to the brood mare ranks. 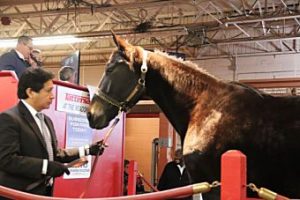 Swift Swanda was the second highest priced seller at the Tattersalls Winter Mixed Sale at $240,000. Photo by Ken Weingartner.

Sold as a racehorse prospect or a broodmare prospect, according to the sales catalog, Joshua Green, serving as agent for Spring Station Bloodstock of Delaware. At the sale, Green told the U.S. Trotting’s Ken Weingartner, that Swift Swanda would be bred to Walner this year.

Swift Swanda has an impressive maternal side. Her third dam is the mother of the great CR Kay Suzie, who was a world champion and is now in the Hall of Fame. Swift Swanda, a five-year-old daughter of Swan for All, completes her stellar racing career with more than $450,000 and a mark of 1:52.3. She is a multiple Indiana Sires Stakes winner.

A total of four sold over the $200,000 mark. According to the story by Weingartner, Whichwaytothebeach was the top seller at $390,000 to Gino Toscani of Ontario. Sale prices were up compared to the 2020 sale with 90 horses and stallion shares selling for $4.25 million.