Swift Swanda, the talented trotter from the Erv Miller Stable, will go for her fourth win of 2021 Wednesday, June 30 in the $22,000 Indiana Sired Trot. The race, made up mostly of sophomore trotting fillies, includes some colts and geldings as well for the event. 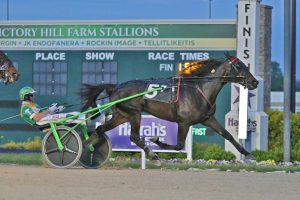 Starting from post one, Swift Swanda will be driven by Trace Tetrick and the heavy favorite of the field. The Swan for All filly is a perfect three for three this season, taking a new career best time of 1:53.4 earlier this month. Swift Swanda was a standout at two last season, winning the $220,000 Indiana Sires Stakes Super Final. She also ventured into open company, finishing third in the Kentuckiana Stakes and making the final of the Breeders Crown Championship.

Owned by Anthony Lombardi and The Kales Company, Swift Swanda was bred by Lavon Miller. She is closing in on $300,000 in career earnings and has now won nine of 15 lifetime starts with only three of those outings out of the top three. Swift Swanda was an $80,000 purchase at the Hoosier Classic Yearling Sale by her connections.

Another filly in the field that is off to a great start this season is Dewtiful’s Grace, a daughter of Pine Credit. Trained and driven by LeWayne Miller, Dewtiful’s Grace has won four of eight starts this season and scored a career best mark of 1:54.4.

After just four starts last year as a two year-old, winning two of those outings, Dewtiful’s Grace has come back strong this season for owners Oakwood Farms, Kristen Wagler and Eleven Star Stables. Clifford Slusher bred the filly. She is the top performer for Pine Credit in 12 total starters.