Sweetfancy and Michael Oosting kicked off the Thursday, Sept. 22 program at Harrah’s Hoosier Park with a win in the $16,000 final of Indiana Sired Mini Series action. The freshman trotter scored the victory in 1:59.2. 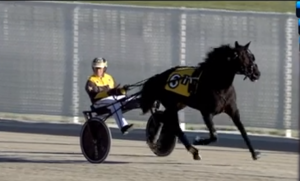 Sweetfancy started from post five and showed no early interest in the lead as Hallmark Janie and Sam Widger set the first fraction of :27.3 before Payday and Trace Tetrick circled around and took over at the half in 1:00.2. Spearfish and John DeLong were out and moving at the half and led the outer flow up to the leader at the three quarters in 1:30.3.

In the stretch, Sweetfancy popped off cover behind Spearfish and trotted home in :28.1 to score the win by a neck over Spearfish. Midnight Dreams and Jordan Ross closed late to finish third.

Sweetfancy paid $10.80 for the win. The Muscle Massive filly is trained by Missy Essig and owned by Bittersweet Racing and Padjen Associates. Atlee Chupp bred the filly, who earned her first career trip to the winner’s circle in her seventh career start. She now has more than $13,000 on her card for her connections.

Essig also sent out the last race winner as Luckisontheway scored a win in conditioned pacing action for driver John DeLong. The freshman son of Luck Be Withyou sat patiently in third as Uncle DD and Atlee Bender set fractions of :27.3, :57.0 and 1:26.1.

In the stretch, Luckisontheway was able to move up for the win by one and one-quarter lengths in 1:53.2, a final panel in :26.3. Uncle DD finished second over Bible Thumper and Jared Finn for third.

Luckisontheway paid $14.60 for the win. He is owned by Hunter Oakes and was bred by Jonas Graber.

It was a big night for driver Jordan Ross who won four races in the center of the card. Ross guided Caesar’s Shot, Carlos Mittanna, Caviart Richmond, and Look At J to wins with the final three back to back winners in Races 4 – 6. The longest shot was Look at J, trained by Robert Taylor, who paid $32.60 for the win. The Aracache Hanover three-year-old gelding won the race in 1:53.0 for Taylor Racing LLC.