It was another sweet victory for the warhorse Sweet Mr Pinetucky Wednesday, Feb. 16 at Miami Valley Raceway. The Indiana sired horse was an easy winner in 1:55.2 with Trace Tetrick at the controls. 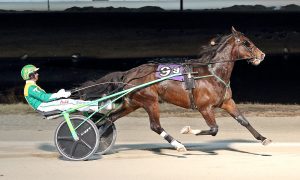 Starting from the outside post nine in the 10-horse field, Sweet Mr Pinetucky floated out from behind the gate and secured a spot in mid pack as RJZ First Lady and Kayne Kauffman set the tempo, trotting by the quarter in :27.3. By the half in :57.2, a second line of challengers had formed led by Sweet Mr Pinetucky, who had been flushed to the outside.

By the three-quarter mile marker, Sweet Mr Pinetucky had the lead as he passed by the marker in 1:25.4. From there, he opened up on the field by five heading into the stretch. Sweet Mr Pinetucky was well under wraps at the wire, winning comfortably by one and three-quarters. Conway Kellyanne and Jeremy Smith finished second over Turbochargedpete and Trevor Smith for third.

Sweet Mr Pinetucky paid $10.80 for the win. The eight-year-old Pinetucky gelding is trained by Lester Raber and co-owned by him and Floyd Raber, who bred the trotter. He earned his first win of 2022 but it was his 30th trip to the winner’s circle. His career best time remains at 1:53.0 taken as a seven-year-old a Miami Valley Raceway. Earnings for Sweet Mr Pinetucky are now just under the $350,000 mark.

Sweet Mr Pinetucky is out of the mare, Sweet Stockings, who he got his flashy marking from. During her career, she earned a mark of 1:57.1 and earnings over the $77,000 mark. After missing the mark with her first three foals, she has produced five straight winners, including the youngest, a four-year-old gelding by Pilgrims Chuckie who was campaigned by Rabers last year as well. Chuckiessweetdream now has more than $50,000. Her foals follow a trend of getting better with age. She is also a half-sister to Blowlowsanta, who earned a mark of 1:54.2 during his career with earnings over $340,000.