The Indiana Sired Fair Circuit (ISFC) made it’s 11th stop Monday, Aug. 1 at the Fayette County Fairgrounds in Connersville. The stop was the latest on the “Quest for the Governor’s Cup” set for the Indiana State Fair next week. 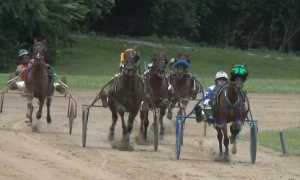 Swartz Bros Emily and Clay Craib lead the way to the finish line in two-year-old pacing filly action in the ISFC.

Featured in the first three races were the two-year-old fillies and Swartz Bros Emily picked up her second win on the ISFC. Starting from post five, the freshman filly went straight to the lead for trainer-driver Clay Craib. They had a strong hold on the lead through fractions of :33.2 and 1:06.0 over the good track that had endured some rain. Heading to the three-quarters, the outer flow of traffic had formed led by Go Go Jacki Jo and Michael Detweiler. However, Swartz Bros Emily was on top of her game, pacing home for the win by a half length over Rockin Ruthie and Doug Rideout, who popped out of the two hole at the head of the lane to close quickly for second. Go Go Jacki Jo finished third.

Swartz Bros Emily earned her second win in her third start. She stopped the timer in 2:06.4 for her latest win with her career best remaining at 2:04.0 taken at Shelbyville a few weeks earlier. Triple R Stables and Andrew Craib own the Hypnotic Blue Chip filly. Amos Schwartz bred the pacer.

Swartz Bros Emily is one of three foals by Hypnotic Blue Chip that were sold at auction last fall. She brought $3,500 through the Northern Indiana Yearling Sale at Topeka. She also represents the final crop of Hypnotic Blue Chip for the state of Indiana as he is now standing in Illinois.

Another impressive winner on the day was in the two-year-old colt and gelding pacing ranks as Attaboy Lloyd and Mike Peterson scored a win by more than four lengths in 2:04.3. The Check Six gelding, owned and trained by Scott Linville, was out early as Vel Dwayne and Bradley Ferguson set the pace of :33.2, 1:03.3 and 1:34.3. Attaboy Lloyd was back out around the final turn before pulling away from the field for the win. Vel Dwayne finished second over Lucky Soul and Clint Earvin Jr. for third.

It was the first win for Attaboy Lloyd in five starts. He was also purchased at the Northern Indiana Yearling Sale, bringing a price of $4,500 under the name Gloryview Jupiter.

Linville also had a winner in the three-year-old trotting filly division as Tabsladyone wired the field for the win in 2:04.0. Guided by Peterson, the Mr Cantab filly won by three lengths over Walk With Me and Doug Rideout and First N Line and Gerald Miller. Linville owns the filly with John Pitts.