Swansea is still going strong on the East Coast. The Swan for All four-year-old trotted home as the winner of the $42,000 Open Handicap at Yonkers Raceway Saturday, Nov. 16 in the featured event of the night. 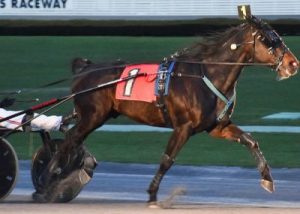 Swansea is shown winning a race at Yonkers earlier this year. The Indiana sired gelding is now on a four-race win streak. Photo by Katy Gazzini

Originally owned by Lester Raber, Swansea started his most recent journey from post five with Austin Siegelman in the bike for Trainer Scott Di Domenico. He started the outer flow at the halfway mark and flushed out cover, which eventually gave him a clear spot to trot home for the win in 1:55.1. Will Take Charge was a length back in second with Jordan Stratton driving while Melady’s Monet and George Brennan finished third.

Swansea was a $6,500 purchase from the Hoosier Classic Yearling Sale by Raber. After showing a lot of promise last year at three, Raber sold the gelding to Dana Parham and Triple D Stables. Since that time, he has gone on to compete against some of the best older trotters on the East Coast and now has 19 wins in 42 starts with earnings in excess of $280,000.

Swansea has now won his last four starts for his connections at Yonkers Raceway. The Indiana sired gelding was bred by Kevin Kline and Dr. Santiago Gutierrez of Illinois.