What a difference a year makes. After not reaching the winner’s circle last year at two, Swan’s Maid is on fire in 2021. The three-year-old daughter of Swan for All has won four of six starts and will seek win number five Wednesday, May 26 at Harrah’s Hoosier Park. 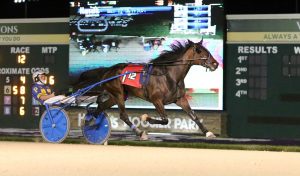 Swan’s Maid and Joey Putnam, shown winning last week in a new career best time, will go for their fifth win of 2021 Wed. May 26 at Harrah’s Hoosier Park. Photo by Dean Gillette

Trained by Joe Putnam and driven by Joey Putnam, Swan’s Maid comes into the $12,500 Indiana Sires Stakes eligible event winning four of her last five starts, including her last outing last week where she earned a new career best time of 1:57.2. The sophomore filly will begin from post three in the ninth race of the night and is the early morning line favorite at odds of 2-1.

Bred by Steven Mast of Mast Standardbreds in Middlebury, Ind., Swan’s Maid is owned by Joe Putnam and Debbie Brown. She was a $32,000 yearling purchase from the Hoosier Classic Yearling Sale by her connections. The trotting filly is from the 100 percent producing mare Barmaid, who has four starters in four foals of racing age, including the tough gelding Martini Show, who is a full brother to Swan’s Maid and is a former Indiana Sires Stakes winner of nearly $300,000. There is also a full sister named Yo Mama that is a two-year-old this season who is preparing for racing in the Verlin Yoder Stable.

Another filly in the race that is off to a good start in 2021 is No Parking Zone from the Robert Wagler Stable. The sophomore daughter of Cherry Hill Park has one win, but has four second place finishes this season and a best time of 1:56.4. Robert Taylor will guide the filly from post two at odds of 7-2 as the second choice in the race. No Parking Zone is owned by Don Swartzentruber of Loogootee, Ind. and was bred by Perry Coblentz of Kentucky.