Swandre the Giant, the two-year-old Indiana sired trotting phenom, has captured the hearts of Indiana racing fans this season, winning all seven of his starts under the direction of driver-trainer Brandon Bates. The Swan for All freshman was sold last week and will make his first start outside of Indiana in an elimination of the William Wellwood Memorial Stakes at Woodbine Mohawk Park Saturday, Sept. 8. 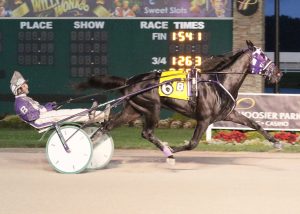 Swandre The Giant leaves Indiana and joins the Jimmy Takter Stable with seven wins in seven starts during his career. He steps into Grand Circuit action in an elimination of the Wellwood Memorial Saturday, Sept. 8. (Photo by Linscott Photography)

Now under the guidance of Trainer Jimmy Takter, Swandre the Giant will begin from post two in the second elimination on the racing program. Yannick Gingras climbs aboard behind the trotter. The top five from each elimination will then return for the Wellwood final slated for Saturday, Sept. 15.

Swandre the Giant is now owned by Diamond Creek Racing, J & T Silva Stables and Howard Taylor. In addition to the remainder of the Indiana Sires Stakes races at Hoosier Park, he is eligible to the Breeders Crown.