As the warmer weather approaches, many are starting to look at the potential of three-year-olds coming into their sophomore season. The Meadowlands released their Hambletonian Winterbook Top 10 Tuesday, Feb. 26 to help identify some of the top trotting colts that could be included in the 94th edition of the race set for Saturday, Aug. 3, 2019 at The Meadowlands. 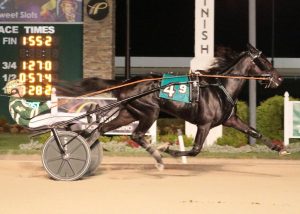 Swandre the Giant was an Indiana Sires Stakes winner this fall for his new connections. Yannick Gingras was in the bike for his last win of 2018. (Photo by Linscott Photography)

Included on the Top 10 list is Swandre the Giant, the standout freshman son of Swan for All. The Indiana sired colt took Harrah’s Hoosier Park by storm last summer, winning his first seven starts under the direction of driver-trainer Brandon Bates before being sold for a reported seven-figure price tag. Swandre the Giant completed the season with nine wins in 12 starts and only finished back of second place once. The DM Stables LLC-bred colt brings in more than $255,000 into his three-year-old campaign with a career best time of 1:54.2 taken at Hoosier Park prior to his sale. Swandre the Giant was listed fifth on the Top 10 list.

Other contenders mentioned in the Hambletonian Winterbook Top 10, in ranking order, include Gimpanzee, Green Manalishi S, Don’t Let’Em, Cantab Fashion, Swandre the Giant, Southwind Avenger, Thunder, Super Schissel, Forbidden Trade, and Chin Chin Hall. A son of Cash Hall, Chin Chin Hall also has Indiana ties. He is trained by Melanie Wrenn and driven by Peter Wrenn. The Kentucky-bred gelding won two of his seven starts last year at two with earnings just over the $200,000 mark. His best time of 1:54.4 was recorded at The Meadowlands in November. He is owned by Gene Oldford Farms and David McDuffee. Oldford, a longtime Michigan horseman who raced frequently on the Indiana circuit, passed away earlier this week.