The entire Standardbred racing world will be tuned in to The Meadowlands Saturday, Aug. 3 for Hambletonian Day. More than $3 million in purses is scattered throughout the 16-race card that includes several Indiana sired horses such as Beckhams Z Tam, Hannelore Hanover, Custom Cantab, Homicide Hunter, Fiftydallarbill,  and Shnitzledosomethin but the Indiana sired horse that will capture the most attention is Swandre the Giant, who is one of 16 sophomore trotters seeking the title in the prestigious $1 million Hambletonian. 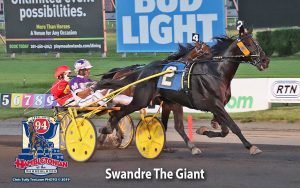 Swandre the Giant will be seeking the title in the $1 million Hambletonian Saturday, Aug. 3 at The Meadowlands. Photo by Chris Tully Trot.com

Swandre the Giant has drawn post three in the first of two eliminations for the Hambletonian. The son of Swan for All comes into the race as a top three choice on the morning line and will get the services of driver David Miller. Now trained by Ron Burke, Swandre the Giant has two wins and two seconds in seven starts this season with a career best time of 1:51.3 taken earlier in July. He has the fastest time of any other horse in his elimination with the top five of eight returning for the final.

The race is carded as the eighth on the program with an estimated post time of 2:20 p.m. The final is set as Race 12. The race will be broadcast live on CBS Sports Network at 4 p.m.