Swandre the Giant, the Indiana sired phenom who rose to fame under trainer Brandon Bates, will make his second start for his new connections Saturday, Sept. 15 in the $400,000 William Wellwood Memorial final at Woodbine Mohawk Park. Swandre the Giant will begin from post seven as the favorite at odds of 2-1. 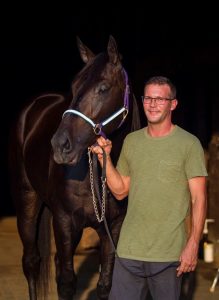 Brandon Bates stops for a photo with his “horse of a lifetime” Swandre the Giant prior to the horse being sold to new connections. (Photo from Bates’ Twitter Account)

Yannick Gingras will be back in the sulky behind Swandre the Giant. The freshman son of Swan for All finished second in the elimination round the week before and returns seeking his eighth win in nine outings for 2018. The race is slated as the fifth on the card with an estimated post time of 8:45 p.m.

In a touching tribute on Twitter by Bates’ son, Hunter, the younger Bates wrote:

My dad has dreamt his entire life about driving a horse of this caliber. He selflessly encouraged the owners to pass him on to the next level, so that my siblings and I have money for school. Proud to be cut from the same cloth.

Hunter, a standout wrestler and football player at Adams Central during his high school campaign, is currently continuing his education and wrestling skills at Wabash College.

Joining Swandre the Giant on the Saturday program at Woodbine Mohawk Park will be another standout Indiana bred trotter Fiftydallarbill from the Bill Crone barn. The three-year-old son of Swan for All will compete in the $665,000 Canadian Trotting Classic, which is race seven. Fiftydallarbill will be guided from post eight by Brett Miller at odds of 4-1, the second choice of the field.

Rounding out the superstar card will be a third start by Lazarus N in the United States in the ninth race $34,000 Preferred Pace. Yannick Gingras will drive the 2018 Dan Patch winner from post seven as the favorite at odds of 3-5.

Total purses for the evening are in excess of $2 million.