Swandre the Giant, who has been among the top three-year-old trotting colts and geldings this year in North America, will make his next start in the $81,200 W. N. Reynolds Memorial – Scott Frost Saturday, July 27 at The Meadowlands. Now trained by Ron Burke, the Indiana sired colt has drawn post 11, which is the second tier, in the 12-horse lineup. 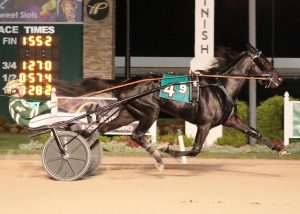 Swandre the Giant is shown winning one of his many starts at Harrah’s Hoosier Park as he enters his last prep race before the Hambletonian at The Meadowlands. Photo by Linscott Photography

Swandre the Giant recently earned a new lifetime mark of 1:51.3 at The Meadowlands in the $153,000 Stanley Dancer Memorial in his last start. The Swan for All colt was selected as the early morning line favorite in the first future wager for the Hambletonian in April, but dropped to 15-1 in the third future wager after a couple of losses. Swandre the Giant will most likely move up in the fourth and final round of the Future Wager for the Hambletonian set for Aug. 1, which will be determined after the elimination heats are drawn. The Hambletonian is set for Saturday, Aug. 3.

Swandre the Giant will face a couple of tough sophomore trotting colts in his start in the Reynolds, including Mr Vicktor, who has won six of eight starts this season and Don’t Let ‘em, who also trotted to a new career best of 1:51.3.  Mr Victor, the 13th choice on the last poll, starts from post 7 while Don’t Let ‘Em is ranked fifth at odds of 10-1 on the most recent poll. Don’t Let ‘Em starts from the extreme outside post 10 for the Reynolds Memorial final.

Two elimination heats of the Hambletonian Oaks are also included on the Saturday card at The Meadowlands.