Swan on a Mission was quite successful during his first two years of racing in Indiana. Now, he is carrying his talents to Dover Downs with a win in conditioned trotting action Tuesday, Dec. 14. 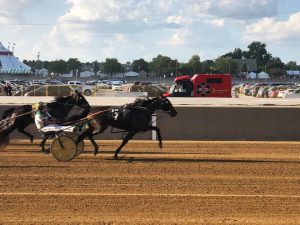 Swan on a Mission, shown winning the Horseman Stake at the Indiana State Fair in 2019 for driver John DeLong, is continuing his winning ways out East with a victory Tuesday, Dec. 14 at Dover Downs. Photo by U.S. Trotting Association

Swan on a Mission, driven by Tim Tetrick, got away well from post six and sat patiently in the three-hole as Special Miss and Mike Cole and Steuben Hanover and Corey Callahan traded turns on the front end through fractions of :28.3, :57.0 and 1:25.4. By the three-quarter mile marker, Swan on a Mission was ramping up for the stretch drive.

In the stretch, Swan on a Mission found his winning stride and soared under the wire for the win by a half length over Steuben Hanover. Special Miss finished third in the mile timed in 1:55.3.

Swan on a Mission paid $9.60 for the win. The five-year-old son of Swan for All is owned by Serenity Racing Stables of Ohio and is trained by Chuck Crissman Jr. Richard Frey bred the Indiana sired gelding, who earned his fifth win of 2021. He now has 11 career wins in 78 starts and is just under the $200,000 mark in earnings. His career best time was taken earlier this year at Harrah’s Philadelphia when he trotted in 1:53.4.

It was the first start at Dover Downs this year for Swan on a Mission. He spent most of the year at Harrah’s Philadelphia and Harrington Raceway. Prior to that, he raced at Northfield Park.