Swan in Motion, the multiple Indiana Sires Stakes winner this season at Harrah’s Hoosier Park, was the fifth horse from the end of the Standardbred Horse Sale Saturday, Nov. 7, but was worth the wait. Howard Taylor, who has invested heavily in the Indiana racing program the past few years, purchased the Swan for All three-year-old colt for $65,000. 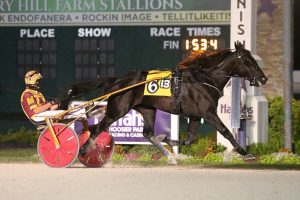 Swan in Motion, the standout Indiana Sires Stakes trotting sophomore from the Jamie Macomber Stable, sold near the end of the Standardbred Horse Sale for $65,000. Photo by Dean Gillette

Part of the Northwood Bloodstock consignment, Swan in Motion last raced in the Breeders Crown elimination after winning the $270,000 Indiana Sires Stakes Super Final the week prior. Trained by Jamie Macomber and driven by Ricky Macomber Jr., the sophomore standout won six of his 11 starts in 2020 with earnings just over the $212,000 mark for owners M & M Racing and Norbert Joseph Maza. His best time was taken in the Super Final of 1:53.1.

Numerous Indiana breeders were ring side at the Standardbred Horse Sale purchasing brood mare prospects. Larry Slabaugh of Goshen paid $70,000 for Attention Hanover and Levin Stutsman of Goshen paid $32,000 for Winner is Coming just a few hip numbers before Swan in Motion.

Attention Hanover is a five-year-old daughter of Somebeachsomewhere with a mark of 1:51.1 and more than $200,000 in earnings. She is a half-sister to Abuckabett Hanover, who raced in this year’s Breeders Crown.

Winner is Coming is a two-year-old colt by the first crop of Betting Line with a mark of 1:51.3 who finished second in the Kentucky Sires Stakes Final. Winner is Coming has deep bloodlines with his third dam being World Champion Delinquent Account, winner of more than $1 million and the dam of Artiscape, also a world champion.

Pond-a-Acres also added to their b rood mare stock with a $52,000 purchase of the Muscle Hill filly Aperfectcrystal. The three-year-old filly took a mark of 1:54.2 this season and is a half-sister to Aperfectyankee, winner of more than $500,000 and a mark of 1:53.0.