Swan in Motion completed a trifecta of wins for the husband-wife team of Ricky and Jamie Macomber Thursday, July 16 at Harrah’s Hoosier Park. The three-year-old Swan for All colt rallied home for the win in the $60,500 Indiana Sires Stakes. 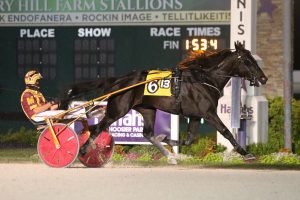 Swan in Motion rolls to an easy victory in the second round of Indiana Sires Stakes action Thursday, July 16. Photo by Dean Gillette

Starting from post six as the favorite of the 10-horse field, Swan in Motion used speed early to get near the front, but J-S Jasper and Alex Udell beat the field to the front spot and set the fractions of :27.4 and :57.3. Swan in Motion moved after the half to the outside and was challenging for the top spot by the top of the stretch when J-S Jasper went off stride. Macomber was able to draw away from the field, winning by three and three-quarter lengths in 1:53.4, a final panel in :28 seconds. Flagman and Rick Plano finished second while Brigotto and Sam Widger closed late for third.

Swan in Motion is owned by M & M Racing and Norbert Maza, Jamie trains the sophomore, who was bred by Lyle Slabach. He has won three of four starts this season and now possesses more than $200,00 in career earnings. His career best time was taken earlier this season in 1:53.2.

Swan in Motion’s only defeat this year was in the first round of Indiana Sires Stakes where he was a close second to Emma Town Bud, the undefeated trotter from the Byron Hooley Stable. Emma Town Bud was scratched out of the second round of Sires Stakes action Thursday.

Indiana Sires Stakes action continues Friday, July 17 with the second round for the three-year-old filly pacers. Two divisions are slated for races 12 and 13. One name is visibly missing from the lineup as Priceless, the two-year-old sensation from the Brandon Bates barn, shipped out to The Meadowlands earlier in the day in preparation for the Mistletoe Shalee. Priceless has drawn post four with Bates in the bike. The $194,400 event is slated as the sixth on the card Saturday, July 18 at The Big M. Priceless has odds of 10-1 on the morning line.