It’s been a great year for Swan Fine Lady. Now, she can add a win in Ohio to her credentials after crossing the finish line first at Hollywood Gaming Dayton Raceway Monday, Nov. 29. 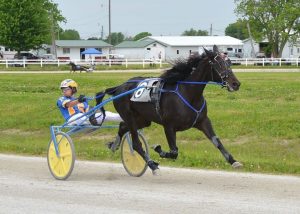 Swan Fine Lady has had a tremendous racing season and now adds another win to her credentials in Ohio. She is shown earlier this year on the Indiana Sired Fair Circuit with driver Joey Putnam. Photo by Dean Gillette

Starting from post nine, driver Jeremy Smith was not deterred by the outside post and sent Swan Fine Lady toward the front, parked on the outside at the quarter in :28.2. Following a break by her cover, she was able to slide over to the two-hole behind race leader Ozma and Brett Miller. Middle fractions of :58.1 and 1:27.3.

In the stretch, Smith moved Swan Fine Lady to the outside and she surged forward, winning by three-quarters of a length in 1:57.4. Zoe Deo and Tyler Smith moved up late for second over Ozma.

A big longshot in the field, Swan Fine Lady paid $38.20 for the win The Swan for All three-year-old is owned by Rocking Meadows Stable and trained by Mervin Schmucker of Florida. Kristin Wagler bred the filly, who now has 18 wins on the year. Her quickest mile was recorded at Harrah’s Hoosier Park last week in a time of 1:57.0 to make it two in a row.

After going winless last year, Swan Fine Lady now has more than $71,000 in earnings. Her biggest win this season came in the $25,000 Governor’s Cup Championship for three-year-old trotting fillies at the Indiana State Fair, which was part of an 11-race win streak on the Indiana Sired Fair Circuit. Schmucker has trained the filly her entire career.