Several competitive races were held for two-year-old trotters on the Indiana Sired Fair Circuit (ISFC) Tuesday, Aug. 2 with one gelding obtaining his first career win. Swan Factor bested a close finish in a three-horse photo to break his maiden in 2:09.3. 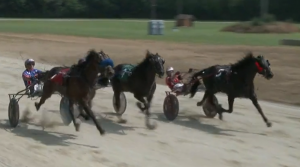 Swan Factor and Michael Detweiler (inside) fend off Asliveroffashion and Mike Peterson (outside) with Braxton and Jordan Ross in the center for the gelding’s first win Tuesday, Aug. 2 at Connersville.

Starting from the extreme outside post five on the narrow track that nearly placed him in the grass at the start, Swan Factor and Michael Detweiler left the gate with authority for the front spot and trotted wide into the first turn before moving over for the lead. Swan Factor was on top by four lengths heading down the backstretch with Braxton and Jordan Ross settling into second. Fractions of :33.1 and 1:05.2 were established by Swan Factor before things began to heat up.

Heading to the three-quarters, Swan Factor was still on the lead, but Braxton pulled out and made a big move to take over, even getting by Swan Factor by a neck at the three-quarters in 1:38.0 before Swan Factor pinned his ears and fought back. The two trotters matched each other stride for stride around the final turn and were locked in a heated battle for the stretch drive. During this time, Asliveroffashion and Mike Peterson began to move in as well and swung to the outside with three horses across the track in the final eighth of a mile. A tight photo gave Swan Factor the win by a neck over Asliveroffashion with Braxton another neck back in third.

Swan Factor is trained by Leander Schwartz for the Black and White Stable of Milroy, Ind. Roman Stoll bred the Swan for All gelding, who was making his ninth career start to break his maiden. He has finished in the top three in six of his starts this season on the ISFC. Swan Factor was a $16,000 yearling purchase last fall from the Hoosier Classic Yearling Sale. His win will put him on the bubble for the Governor’s Cup Championship final next week but will likely secure a place for him in the consolation bracket.

One freshman trotter that is destined to move into the $25,000 Governor’s Cup Championship next week is Help Dust, the top two-year-old trotting colt/gelding of the ISFC this season. A son of Helpisontheway, the gelding was parked during the first half of his race after starting from the second tier for trainer-driver Doug Rideout. He took over for the second half and trotted home for another win on the ISFC. Julie Rideout, Dr. Alan White and Dave Gamble own the freshman trotter, who now has five wins in 10 starts this season, with all 10 starts among the top 3. His career best time was taken at Portland earlier in July in 2:07.4. His most recent win at Connersville was the quickest of the two-year-old colt/geldings on the day in 2:09.0.

Two-year-old trotting filly winners on the day included Edge of Rejoicing (Michael Detweiler, 2:08.2), If Not For You (Doug Rideout, 2:10.2), and Naturdays (Matt Rheinheimer, 2:10.0). If Not for You is the top point getter for freshman trotting fillies in the standings for the Governor’s Cup Championships.

The ISFC has one more stop before determining the final fields for the Governor’s Cup Championships. Horses head to Portland’s Jay County Fairgrounds Saturday, Aug. 6 to wrap up the series. The finals and consolations are slated for the second day of harness racing at the Indiana State Fairgrounds Thursday, Aug. 11.