Swan Chase, the former Indiana Sires Stakes Super Final champ, added another win to his credentials Tuesday, Jan. 12. The seven-year-old gelded son of Swan for All scored the victory in the afternoon’s featured $22,500 Open Trot at Miami Valley Raceway. 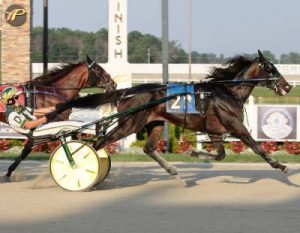 Swan Chase, shown with John DeLong during Indiana Sires Stakes action at Harrah’s Hoosier Park, is now over $500,000 in career earnings with his latest win in Ohio. Photo by Linscott Photography

Starting from post four, Trace Tetrick had Swan Chase ready to roll when the starting gate folded. The duo had their eye on the top spot as the favorites of the field but had to wait until after the quarter in :27.4 before overtaking Pass the Vape and Trevor Smith. Their time on the front end was short lived as Workinitonbroadway and Chris Page came roaring to the lead at the half in :56.1, continuing to lead the way to the stretch.

In the stretch, Swan Chase found the room he needed to use a second move to the lead, trotting home in :29.1 for the half-length victory in 1:53.4. Pass the Vape finished second while Lane of Stone and Dan Noble, longshots in the field, rallied up late for third.

Owned by John Barnard, Swan Chase paid $6.00 for the win. He is trained by Luis “Tony” Quevedo and was bred by Diamond Creek Farm LLC and J & T Silva Stables LLC. It was the first win of 2021 in his second start and the standout trotter now has in excess of $549,000 in earnings. In all, he has 30 wins in 81 career starts and his best time remains at 1:52.4, set as both a four-year-old and last year at six at Harrah’s Hoosier Park.

Earlier in the day, Tyber Tyke was also a winner for Tetrick in the first leg of the Claim to Fame Series. The 12-year-old son of Panspacificflight was an early leader through the quarter in :28.0 before relinquishing the lead to Desire’s Captain and Jason Brewer, who established the remaining fractions. In the stretch, Tyber Tyke moved out and rallied home for the win in 1:54.2, a final panel in :28.1. Desire’s Captain, who was claimed out of the race, finished three-quarters of a length back in second over Delco Papa Bear and Tyler Smith.

Tyber Tyke is now owned and trained by Chris McGuire. He was bred by Herman Miller and is a brother to Michelle’s Hartbeat, former Indiana Sires Stakes champion. Tyber Tyke was purchased for $75,000 out of the Hoosier Classic Yearling Sale in 2010.