Three-year-old trotting fillies were on display at Harrah’s Hoosier Park Wednesday, Sept. 16 for the sixth round of Indiana Sires Stakes action. With May Baby taking the first division as expected, it was an unexpected winner in the second division with Swan Bomb and Ricky Macomber winning the preliminary round. 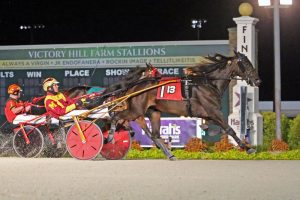 Starting from post one, Swan Bomb got away in mid pack as Givemeonemoretry and Jordan Ross rushed out to the lead at the first quarter in :28.1. Phabaj and Jared Finn were then ready to take over and moved around to the front by the half in :57.1. Phabaj continued to lead the way to the stretch as Swan Bomb was flushed out behind Skyway Tinacious and was ready for the stretch drive.

In the stretch, Swan Bomb turned in a final panel in :28.2 to trot home for the win, one length ahead of Phabaj. Woodside Datendiva and Trace Tetrick moved in for third. Time of the mile was 1:55.3.

Owned by Dreamville Stable of Ontario, Swan Bomb paid $15.20, $8.40, $3.40 across the board. The Swan for All filly won her fourth race of the year in her 12th start. The time of the mile marked a new career best for the Jamie Macomber-trained sophomore. She now has in excess of $55,000 in earnings. She was bred by Jonas Schlabach of Apple Creek, Ohio. Swan Bomb was a $45,000 purchase from the Hoosier Classic Yearling Sale.

Earlier in the evening, May Baby and James Yoder got to the lead after the half and never looked back, trotting home in :27.0 to win the first division of Indiana Sires Stakes action for three-year-old fillies. The Guccio daughter won by four and one-half lengths in 1:52.3, a new career best time.

It was the 11th career win for May Baby. She is now five for eight in 2020 for owner Cheyenne Yoder. Oakwood Farms bred the standout filly, who now has in excess of $225,000.