The Indiana Horse Racing Commission held their monthly meeting at Indiana Grand Tuesday, March 2. The short meeting included the approval of the new surveillance system to be installed in Harrah’s Hoosier Park’s barn area for the upcoming Standardbred meet, which begins Friday, March 26, which is in three weeks. 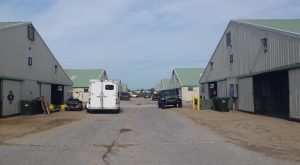 The backstretch area at Harrah’s Hoosier Park will open up for the 2021 racing season Saturday, March 6. The track opens for training Monday, March 8. The 2021 season will include state of the art surveillance equipment in every stall at the track. Photo by Teena Walden

Rick Moore, vice president and general manager of racing, sent out a memo Friday to all horsemen and horsewomen planning to race at the track this year. Moore noted the track is currently installing a new state-of-the art surveillance system throughout the barn area with the end goal to have video coverage of every stall in every barn, including the Paddock. This surveillance will be conducted 24 hours a day.

Moore also went on to note this surveillance project will be the first of its kind in Standardbred racing. The system is designed to promote the highest level of integrity for all equine athletes racing at Harrah’s Hoosier Park. Moore also said the intent of the new system is to ensure a fair playing field for all horsemen participating at the track.

Hoosier Park’s barn area officially opens Saturday, March 6 and training will begin Monday, March 8. Qualifying action will take place with the first session set for Wednesday, March 10. The memo also noted the same health and safety protocols will be in place as they were last fall when racing was completed.

More information about the upcoming season can be found at www.indianagrand.com.