Following a cancellation of racing due to a winter storm on Sunday, Miami Valley Raceway was back in action Monday, Jan. 23 with two Indiana sired horses winning back to back in the first three races on the day. Sunrise Sweetie and Mr Blutos Express each brought home a win for the Indiana sired program. 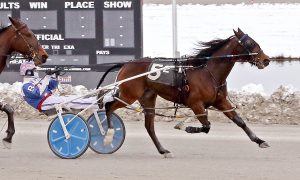 Sunrise Sweetie and Shawn Barker II busted out of the gate and went directly to the lead in the $8,000 fillies and mares conditioned event. They were joined on the outside by Admit and Sam Widger, who were not backing down through the first fractions of :29.0 and :58.1 and 1:27.0. Sunrise Sweetie continued to lead the way around the final turn and was the target of several horses at her back wishing to take over in the stretch.

Sunrise Sweetie maintained her power and rallied home in :29.4 to win the race by three-quarters of a length over Rick N Ponderous, who had sat at her back the entire way for Kayne Kauffman. Lily Grace and Jordan Ross finished third. The time of the mile was 1:56.4 over the good track still wet from the snow on Sunday.

Sunrise Sweetie paid $10.40 for the win. The Always a Virgin five-year-old is owned by Bradley Delaney and trained by Rachel Oenema. Merle Yoder bred the mare, who earned her 11th career trip to the winner’s circle. She has more than $65,000 in career wins with her career best time of 1:53.2 was taken last year at Hollywood Gaming Dayton. She has been with her current connections since last fall.

Mr Blutos Express was strong in the lane, keeping his opponents to his heels and scoring the win by one and one-quarter length. Yoshie Hanover finished second over Long Tom Babe and Hank LeVan for third.

Mr Blutos Express paid $2.80 for the win. The five-year-old Bluto gelding is owned, trained, and bred by Lavern Hostetler. Unraced at two and three, the gelding made his racing debut at the end of 2022 as a four-year-old and is now two for two in 2023. His career best time was taken the week prior in 1:58.2 for Hostetler, who also campaigned his mother, Indiana sired Jessiesexpresslane.

To date, Jessiesexpresslane has had eight foals, six of racing age with Mr Blutos Express now her fastest winner. The family has a two-year-old colt by Muscle Massive that will be eligible to race this year named Mr Jessies Express and a yearling colt by World Cup named Big Bad Express who will head to the track in 2024 as a two-year-old.