The Sunday racing card at Harrah’s Hoosier Park June 20 kicked off with a three-horse photo, giving Flirtin Freddy and John DeLong the edge for the win in 1:52.1. The evening was headlined by the Open Pace later in the card, but Flirtin Freddy set the tone for competitive action on the card. 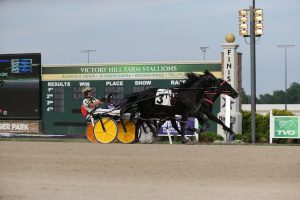 Flirtin Freddy and John DeLong lowered their career best time and earned their first win of 2021 in the first race of the night Sunday, June 20. Photo by Dean Gillette

Starting from post three, Flirtin Freddy and DeLong got the two-hole trip right behind early leader Midnight Rebel and Brandon Bates, who crossed over to the lead at the quarter in :26.4. The tempo was lively for the remainder of the mile with fractions of :54.4 and 1:23.2 before DeLong pulled on the right line and began the stretch challenge.

At the wire, Flirtin Freddy got a head in front at the wire for the win, a final panel in :28.3. Midnight Rebel was three-quarters of a length for second over Rosa’s Rebel and Terry Skinner, who rounded out the trifecta.

Flirtin Freddy paid $10.00 for the win. Dylan Davis trains the three-year-old gelded son of Fred and Ginger, who is owned by Howard Taylor and Edwin Gold. James Stonecipher bred the sophomore, who lowered his career best time in the effort. It was his first win of 2021 in his second outing. He is the youngest foal from the great McFlirty, who earned in excess of $459,000 during her career and took a mark of 1:49.3.

Later on the card, Little Rocket Man and DeLong scored a win in the evening’s $20,000 Open Handicap. The duo moved toward the leaders around the final turn and dug in deep to get by competition for the win by one-half length in 1:49.2. Pacing home in :26.3, Little Rocket Man was able to get by Colossal Stride A and Brandon Bates in the final strides for the win. He’zzz A Wise Sky and Michael Oosting finished third.

Little Rocket Man is trained by Missy Essig and owned by Russ Beeman and Jack Freeman. The win was his 24th career trip to the winner’s circle for his connections. The Rockin Image five-year-old now has in excess of $360,000 in career earnings.