Sunburst Itis and Trace Tetrick circled the field to score the win in the $20,000 Claiming event at Miami Valley Raceway Tuesday, April 12. The duo completed the mile in 1:52.2. 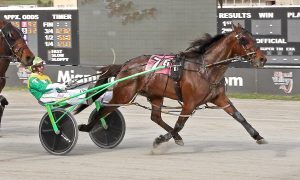 Sunburst Itis and Trace Tetrick circled the field in the final turn to score the win in the claiming event Tuesday, April 12 at Miami Valley Raceway. Photo by Conrad Photography

Starting from post seven, Sunburst Itis had no intentions of getting into the mix early as Intrepid Ivy and Tyler Smith left gamely from the far outside to grab the top spot at the quarter in :26.3. Criminal Record and Dan Noble were out to challenge before the half in :56.0 and took over the top spot heading to the three-quarters in 1:23.2.

Around the final turn Sunburst Itis popped out and swung wide to get around a lot of traffic and had a clear shot to advance in the stretch. The Indiana sired gelding paced home in :28.2 to win by a half-length at the wire over Lion Rock N and Kayne Kauffman, who also closed late. Captain Zamperini and Jeremy Smith were also in the mix late to finish third.

Sunburst Itis paid $11.80 for the win. The six-year-old son of Tellitlikeitis is owned by Craig Rhodes and Tim Maier. Maier also trains the gelding, who was bred by Dave Mast. It was his second win of the year and his 13th overall. The time of the mile equaled his career best, which was set at Rosecroft Raceway as a four-year-old. Sunburst Itis now has more than $150,000 in career earnings.

Owners Rhodes and Maier claimed Sunburst Itis back out of his last start. They had previously owned the gelding before he was claimed from them two starts ago. The gelding has been popular in the claiming game over the years, changing hands several times. He was originally part of the first crop by Tellitlikeitis and was sold at the Hoosier Classic Yearling Sale from Mast Standardbreds for $17,000. Sunburst Itis is a half brother to KJ’s Foxy Lady, who has a mark of 1:52.1 and nearly $400,000 and is still racing at the age of 12 and Silver Fox J, who has a mark of 1:50.4 and more than $400,000 and is still racing at age 10, showing the longevity of the family. The family also has a two-year-old filly named Beyond Foxy for the 2022 racing season that is a full sister to Sunburst Itis.

Another Indiana winner on the Tuesday card was Maggie Rhee, who won the $30,000 Fillies and Mares Open Handicap. The five-year-old Jereme’s Jet mare from the Tim Wilson barn, came toward the leaders first up and endured, winning by one and one-half lengths in 1:51.1, a final panel in :27.3. Kayne Kauffman drove the mare, who is owned by Wilson Racing Stable, Norman Neff and Mark Eichberger. John Leahy bred the mare, who is now three for seven in 2022. Overall, she has 19 wins in 44 starts with earnings over the $200,000 mark now. Her career best time remains at 1:50.1 taken as a three-year-old at Harrah’s Hoosier Park.