Curtis Sumpter had a productive day at the Shelby County Fairgrounds Tuesday, Aug. 4, winning all three of his starts on the 14-race card. Two of the races were won by driver Matt Rheinheimer while the third was driven to victory by Andy Shetler. All three winners are by Indiana sire Riggins. 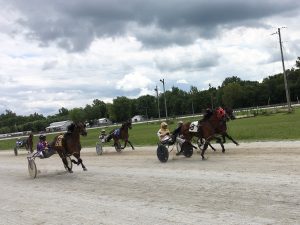 Sumpter’s day began in the three-year-old filly pace as a standout from last year, Rigginswind, made her way back to the winner’s circle. The sophomore daughter of Riggins sat patiently behind Vel Donna and Mike Peterson during the mile before moving out in the stretch for the challenge, winning by one-half length in 2:00.0. The pair had a big jump on the rest of the field with Hayswood Linda and Jordan Ross finishing third.

Owned by Devon Miller, Rigginswind now has three wins in seven starts this season and is currently on a two-race winning streak, also winning last week at Connersville. The Marlin Ray Miller-bred filly has 10 career wins and in excess of $30,000 in career earnings.

Sumpter made the trip back down in front of the grandstand for the fourth and final division of three-year-old pacing fillies and Rheinheimer drove Yo Lets Bounce to victory in 2:00.4. Also, by Riggins, the Charles Kline-owned filly used less gate speed than others in her race and came charging at the leaders down the backstretch the second time, going to battle with Dojea Gigi and Mike Peterson. The two fought for the win down the stretch with Yo Lets Bounce getting the advantage by a half length at the wire. Hayswood Pacifica and Jordan Ross closed well on the far outside to finish third.

It was the third win of the year for Yo Lets Bounce. She was bred by Kline and took a new yearly best time two weeks ago at Portland in 1:57.3.

Sumpter closed out his day at Shelbyville with a win in the final race on the card in the three-year-old pacing colts and geldings division. All three divisions were timed in under 1:59 for the afternoon with Gentlemensattitude grabbing the win by a head in 1:58.3.

Driven by Andy Shetler, Gentlemensattitude sat off the pace and came rolling at the leaders at the three-quarter mile marker. From there, he never backed down, getting the best of Vel Charlie and Jay Cross at the wire. Cherokees Gorgeous and Doug Rideout finished third.

Gentlemensattitude picked up his third win of the year and his first on the Indiana Sired Fair Circuit. He is owned by Steven Sitkoff of Palm Beach Gardens, Fla. and was bred by Chapel Ridge Farm.

Rigginswind joined Tropical Tracey as the fastest in the three-year-old pacing filly ranks in the four divisions with their miles in 2:00.0. Tropical Tracey, driven by Clifton Bell for trainer Donna Holt, now has four wins this season for owner D & R Racing Stable of Benton, Ky.