Summit City Swan, the talented three-year-old trotting filly from the Byron Hooley Stable, is currently tied for most wins in the nation for her division. Through the end of August, the Swan for All filly had recorded 10 wins in 20 starts with $83,810 picked up in earnings. The best time this season for Summit City Swan is 1:55.0. 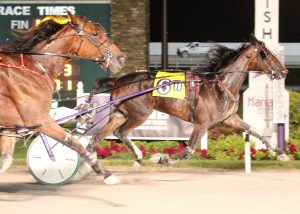 Summit City Swan, shown winning an Indiana Sires Stakes preliminary round at Harrah’s Hoosier Park, has won 10 races this year to be tied atop the standings for sophomore trotters. Photo by Linscott Photography

Summit City Swan is joined by four other sophomore trotters with 10 wins this year. Those trotters are Reckless Image, I Get it, Frontier Manard and Loussolataire. Of the five with 10 wins this season, the Indiana sired filly has the most earnings and the quickest time.

Owned by Summit Pacing Acres LLC of Fort Wayne, Ind., Summit City Swan was bred by Karl Dean Miller of Millersburg, Ind. Her mother, Earls Miss Muffit, was an Indiana Sires Stakes champion and scored 14 wins in her career with earnings in excess of $322,000 before she was retired to the brood mare ranks. Summit City Swan is her first foal. She has a two-year-old filly this year named Whomshallshefear owned by DeLongs that has not raced yet.

The wins for Summit City Swan have been scattered between the Indiana Sired Fair Circuit and Harrah’s Hoosier Park as well as a fair in Ohio. Derek Hooley has driven her the majority of the time but she also has wins with Brandon Bates, Jay Cross, and Matt Rheinheimer this season.