Summit City Swan, the standout three-year-old Indiana sired daughter of Swan for All, is headed to Delaware, Ohio for Jug Week. Owned by Summit City Pacing Acres, the sophomore filly will step up to take on five other opponents in the $76,125 Buckette Wednesday, Sept. 18. 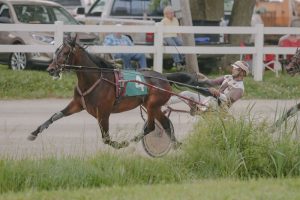 Summit City Swan and Derek Hooley are en route to one of their many wins this season at Converse earlier this summer. Photo by Dean Gillette

Summit City Swan has drawn post six in the six-filly lineup. Ronnie Wrenn Jr. has been called on to drive her as she seeks her 11th win in 22 starts for 2019. Her fastest win time this season was taken at Harrah’s Hoosier Park in 1:55.0 but she has trotted in 1:54.1 this season also.

Trained by Byron Hooley, Summit City Swan will see her biggest opponent from post one from the Julie Miller barn. French Café, who has three wins in eight starts this season and a mark of 1:52.3, she comes into the race off a fourth-place finish in the Kentucky Sires Stakes Final at The Red Mile where she trotted in 1:51.4. She will once again be driven by Andy Miller.