On a day to honor those who served our country, it’s only fitting that a horse named after an American Hero scored his first career win. Sullenberger, named after the pilot who landed the plane in the Hudson River, broke his maiden at Harrah’s Hoosier Park. 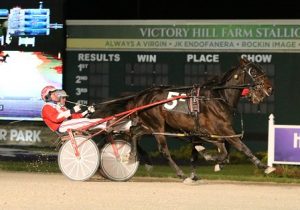 Driven by Casey Leonard, Sullenberger rallied to the lead just after the quarter in :28.1, Always A Hero and Sam Widger then took their shot at the lead, taking over at the half in :57.2 and giving Sullenberger a perfect two-hole trip for the second half of the race.

In the stretch, Sullenberger found the room he needed to move up and overtake Always A Hero, winning the race by a neck in 1:56.2. Lickcreekmajicsrd and Braxten Boyd finished third.

Sullenberger was a bit of a surprise at the windows, paying $16.00 for the win. The two-year-old son of Jereme’s Jet is trained by Ross Leonard for Daybreak Racing Stables, who also bred the gelding. It was his eighth start of the year. He is out of the mare, Amarillo Sky, who took a mark of 1:52.4 during her career. She has produced seven foals of racing age with Sullenberger her youngest. She has now produced five winners with Gerardo being her biggest success. The Rockin Image gelding, who is still racing, has a mark of 1:50.0 and has earnings in excess of $300,000.