With the COVID-19 virus shutting down all schools, many Indiana students have found a place in the barns across the state. Schools are not expected to go back into session until May, leaving time for many to get in the barn and help families with day to day tasks with the horses. 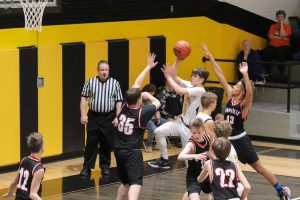 Carson Conrad (white jersey) goes up for a shot during a game for Morristown this past winter. Photo by Sara Conrad

One of those students who is spending his time wisely is Carson Conrad. A recent transfer to Morristown High School, Carson has been accompanying his father, Charlie, and mother, Sara, along with younger brother Carder, to the family Standardbred operation at the Shelby County Fairgrounds. Instead of sitting at home, Carson is working around the barn, jogging horses and spending quality time with his family. Carson drove in his first matinee this past summer at the Darke County Fair in Ohio. His passion for racing is equaled only by his passion for hoops.

An eighth grader this season, Carson is a welcome addition to an already successful basketball program at Morristown. In 2018, the school won the Class A Basketball State Championship. Carson played on his eighth-grade team this year and was a major asset and will be a great factor for the high school program next year under Coach Scott McClelland.

In addition to scoring more than 20 points at times for his team, Carson also sank a three-pointer during a special promotion at an Indiana Pacers game last year. His family are all big basketball supporters and the next four years will be fun to watch this Indiana Standardbred kid shine on the court as well as on the track in Indiana.