The sophomore sons and daughters of JK Endofanera were out in full force Thursday, May 20. A total of four winners were recorded from the sire, who had a breakout season with his first crop last year in Indiana. 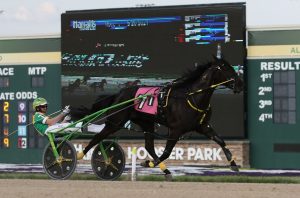 Skyway Damsel and Trace Tetrick were the first of four winners on the Thursday, May 20 card at Harrah’s Hoosier Park by sire JK Endofanera. Photo by Dean Gillette

The evening kicked off with a win from Skyway Damsel from the Matt Rheinheiner stable. The three-year-old filly, driven by Trace Tetrick, pursued the lead early and never looked back, turning in the near gate to wire effort in 1:52.4.  Eternal Bliss and Peter Wrenn finished second over Carbon Cider and John DeLong for third.

Skyway Damsel paid $19.40 for the win. She is owned by Marlin Miller and was bred by Michael Schlabach. The mile was a new lifetime mark for the lightly raced filly.

Fox Valley Tinka joined Skyway Damsel as a winner from sire JK Endofanera. Driven by Michael Oosting, Fox Valley Tinka moved to the lead at the half and continued to set the tempo to the wire in 1:54.4. Phelgon and Brandon Bates finished three-quarters of a length back in second followed by Rosas Image and Trevor Henry for third.

Trained by Joel Smith, Fox Valley Tinka is owned by Paula Smith, James Runyan and Lynwood Romano. Fox Valley Standardbreds bred the sophomore who scored her first career win in the mile. She was unraced at two.

JK Endofanera scored a trifecta in the eighth race of the night with the top three finishers representing him. Chipper Daisy, driven by Joey Putnam, began moving up around the final turn and dug in gamely to get to the wire first in 1:55.3. Thetruthandtheway, also by JK Endofanera, finished a neck back in second for Brandon Bates followed by Shesa Lucky Lady and Trevor Henry for third.

Chipper Daisy is owned and trained by Wilbur Eash, who also bred the filly. It was her first career win after being unraced last year at two for Eash.

The final winner from JK Endofanera was JK’s Jenna, also trained by Wilbur Eash. Driver John DeLong tried for the lead early but found a seat behind Skyway Ideal, another JK Endofanera sophomore, and opted follow her to the stretch. JK’s Jenna took over and moved on for the win by one and three-quarter lengths in 1:53.2. Electrocuted and Don Eash finished second followed by Topville Rhonda, another product of JK Endofanera, driven by LeWayne Miller.

JK’s Jenna also earned her first win of her career for Eash, who bred and raised the filly.  She is out of Sandysgoldenhour, who took a mark of 1:52.0 and made six figures during her racing career. JK’s Jenna is the first foal from Sandysgoldenhour, former Indiana Sires Stakes contender.