Three divisions of the Star Destroyer were contested at Harrah’s Hoosier Park Thursday, Nov. 18 featuring two divisions of trotters and one division of pacers. Pub Crawl was the winner in the first trot, but an upset occurred in the second division of the open stakes race. 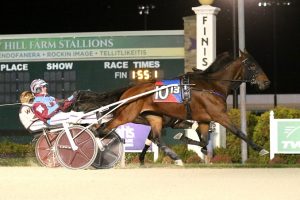 Street Gossip and Sam Widger went unnoticed at the betting windows and left the gate at odds of 24-1. The Cash Hall gelding got away in mid pack after starting from the second tier. Lockbox and John DeLong were the first leaders at the quarter in :27.2 with race favorite Swingforthefences moving to the top spot for the middle fractions of :57.3 and 1:27.2.

In the stretch, Swingforthefences and Peter Wrenn held strong on the inside as Street Gossip moved to the outside and closed in, scoring the victory by a half-length in 1:55.1, trotting their final panel in :26.4. Lockbox finished third.

Street Gossip paid $50.00 for the win. The sophomore is trained by Ohio based Virgil Morgan Jr. and owned by Carl Howard and Jesmeral Stable, also of Ohio. It was the 10th win of 2021 in 24 starts. The gelding took his career best time earlier this year at Harrah’s Hoosier Park in 1:54.1. He is now 14 for 32 lifetime with more than $339,000 in career earnings, making the bulk of his earnings in Ohio Sires Stakes action. He was a winner in the $75,000 Ohio Sires Stakes Consolation and also a winner during Jug Week in the Ohio Breeders Championship. He has now had four starts at Harrah’s Hoosier Park with two wins, all of which have been in stakes action.

Earlier in the night, Pub Crawl and Peter Wrenn were convincing in their win of the Star Destroyer Stakes race. Starting from post nine, the sophomore filly had to work to get to the lead at the quarter in :27.1 but then was comfortable trotting the rest of the way, scoring the win by three lengths in 1:55.2, a final quarter in :28.1. Dewtiful’s Grace and Michael Oosting finished second over Queen of All and John DeLong for third.

The favorite of the field, Pub Crawl earned her seventh win of 2021 for trainer Julie Miller. The Bar Hopping filly is nearing $500,000 in career earnings for owners Marvin and Lynn Katz, Al J. Libfeld and Sam Goldband, all of Ontario. Her career best time of 1:53.4 was taken as a two-year-old at The Red Mile. She is now two for three at Harrah’s Hoosier Park, winning back to back stakes in the $105,000 Crossroads and the $50,000 Star Destroyer.

The pacing division of the Star Destroyer closed out the card with Bulldog Hanover making another trip to the winner’s circle. The Shadow Play sophomore was parked every step of the mile before rallying home in the stretch for the win by a head over Goldie’s Legacy and Trace Tetrick. Betterrock and Brandon Bates finished third.

John DeLong drove the talented three-year-old for trainer Jack Darling, who is co-owner of the colt with Bradley Grant. He has now won nine of 14 starts this season and increased his bankroll to more than $741,000. His career best time was taken at Harrah’s Hoosier Park earlier this year in 1:48.0. He is now undefeated in three stakes starts in Indiana with the Monument Circle and Circle City added to his win in the Star Destroyer.