The Trent Stohler Stable is trying a new location during the off season of Hoosier Park. Stohler is currently racing at The Meadows and horses from his barn have been winning races left and right. In 79 starts, Stohler has picked up 15 wins and is maintaining a win average of nearly 20 percent. Several of the horses in his barn are Indiana sired horses and they are holding their own against open competition. 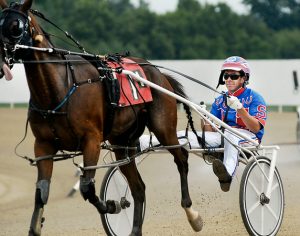 Trent Stohler is maintaining a high win percentage at The Meadows this season. The Markleville, Ind. native has been racing there since the conclusion of the Hoosier Park meet earlier in November. (Photo by John Cleary, The Herald Bulletin)

Included in the list of multiple winners are Blakemore, Cult Icon and Jazzy Image. Both Blakemore and Jazzy Image are products of Rockin Image with Blakemore picking up a new career best time of 1:53.3. Other winners from the Stohler barn include Amarettigone, Captain Velocity, Downwyn Shark, Half A Virgin, He’s A Popper, Terrorificvelocity, Ubettorbeturlife, Velocity Trelific and Meetmeatthedance, who was a winner Monday, Nov. 26.

Because of his success, Stohler was recently featured in a Meadows press release about his decision to compete in Pennsylvania this winter and commented, “I like the people there, the style of racing and the conditions of the races. We have certain horses that fit certain classes. That helps, as does having the right drivers.”

Stohler is relying on catch drivers from The Meadows to steer his horses and has utilized Dave Palone, Tony Hall and Jim Pantaleano for most of his starts. Although the horses are not stabled on the grounds at The Meadows, Stohler stated through the press release they ship in the night before, race, and return to his farm in Markleville, Ind. at the conclusion of the racing program. The trip is four and one-half hours one way.

The Stohler stable is faring well in 2019. In 555 starts, horses from his barn have earned 97 wins and are maintaining an average of over .300 this season. The purse earnings are also a record to date with more than $850,000 accumulated, which is the most in a single season for Stohler since he started training in 1991. In all, Stohler has 1,128 career wins.