Stir it Up made her Saratoga debut a winning effort Monday, June 13 for trainer-driver Brian Cross. The Indiana sired mare rallied from the back of the pack and as Saratoga’s track announcer said, “Put the swoop to the group” for the win. 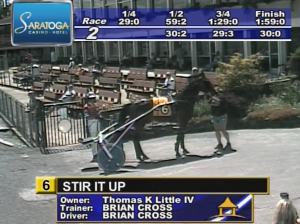 Stir it Up and Brian Cross made their Saratoga debut a winning one Monday, June 13.

Starting from post six, Stir It Up used no early intentions from the gate but JK Depends, a fellow Indiana sired mare, did. Driven by Wally Hennessey, JK Depends moved out to the lead as the favorite to set the fractions of :29.0 and :59.2. Heading to the three-quarters, Rah Rah Blue Chip and Jim Devaux led the charge first over and Stir It Up was third over for the final quarter. Around the final turn, Cross flipped Stir it up three wide so that she was prepared for the stretch.

Widest of all, Stir It Up rallied home for the win with a :29 second final quarter. She was a half-length winner over Rah Rah Blue Chip. JK Depends, a three-year-old daughter of JK Endofanera, finished third.

Stir It Up paid $14.40 for the win. The four-year-old Rockin Image mare is owned by Tom Little IV and was bred by William and W. Patrick DeLong. Stir It Up stopped the timer in 1:59.0 for her Saratoga debut.

Unraced at two and three, Stir It Up began her racing career this spring at Harrah’s Hoosier Park, winning in 1:57.4 under the direction of Jim Eaton before changing hands to Cross. Her start at Saratoga was her first start for her new connections and she is now two for four lifetime.

Stir it Up was previously owned by her breeders, the DeLongs. And, she is part of the successful family out of the mare Art Matters, who is a daughter of the great Hit Parade. Art Matters has produced two with marks under the 1:50 time barrier, Ideal Matters (1:49.0, $648,000) and Frost Damage Blues (1:49.4, $339,000). The family has a three-year-old filly by Rockin Image named Takealookatmenow and a two-year-old named Tellmeitmatters by Tellitlikeitis, a colt. There is also a weanling filly by Tellitlikeitis named Lilliputian.

The speed roots go deep in the family. The dam, Art Matters, is a half sister to Star Of the Show, who is the dam of Virgo, the Indiana sired gelding by Always a Virgin who has a mark of 1:48.3 and more than $369,000.