Bridge to Jesse’s made his nine-year-old debut a winning effort Saturday, April 30 at Harrah’s Hoosier Park. The veteran trotter was a big winner in conditioned action scoring the win in 1:54.3. 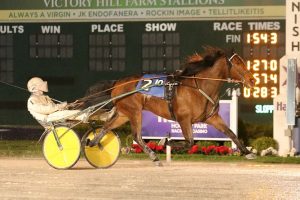 Bridge to Jesse’s earned his 50th career win and his first win of 2022 in his debut as a nine-year-old at Harrah’s Hoosier Park for driver John DeLong. Photo by Dean Gillette

Starting from post two, Bridge to Jesse’s and John DeLong sat right behind Sir Jesse and Brandon Bates at the quarter in :28.3 before moving out and around to the lead. They were off to the races at that point, opening up by two through the half in :57.4 and three-quarters in 1:27.0 before drawing away even more in the stretch. Bridge to Jesse’s was a winner by four at the wire, trotting home in :27.3 during his 2022 debut. Sir Jesse finished second over Brookview Bolt and Ricky Macomber Jr. for third.

Bridge to Jesse’s was the favorite of the field, paying $3.00. The Jailhouse Jesse gelding is owned by William, W. Patrick, and Ray DeLong and Roger Welch. Welch has trained the trotter throughout his entire career, which began at two by winning 10 of 12 starts. The multiple-year Indiana Trotter of the Year earned his 50th career trip to the winner’s circle and is now over $1.1 million in earnings. Bridge to Jesse’s, who has raced primarily in Indiana, took his career mark at six in 1:51.1.

Another top trotter in Indiana was a winner Saturday as Whata Swan and Trace Tetrick won the $22,000 Open Trot. The duo got away in mid pack early before being flushed first over before the three-quarters in 1:24.3. From there, the six-year-old Swan for All horse trotted home in :27.4 to win by one and three-quarter lengths over Toy’s For You and Rick Plano. Action Uncle and Brett Miller finished third.

Whata Swan is owned by John Barnard and trained by Tony Quevedo. He is now three for four in 2022 and has 33 career wins overall. He also pushed his career earnings tally over the $500,000 mark with the win. His career mark was taken as a five-year-old last year in 1:51.2.

It was one of six wins on the card for Tetrick. He is currently leading the driver standings again in 2022.