Several Claiming Series kicked off the Friday, Nov. 12 racing program named after racetracks owned by Caesars Entertainment. One of the series was reserved for two divisions of the $15,000 claimers in the $10,000 Indiana Grand. Trainer Charlie Stewart and driver Trace Tetrick won both divisions with two Indiana sired horses Shady’s Starlight and Captain Zamperini. 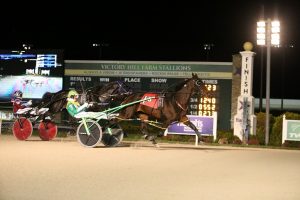 Captain Zamperini won his second straight and third overall for Trainer Charles Stewart, who claimed him in early October. Trace Tetrick guided the gelding to victory in the Indiana Grand Claiming Series. Photo by Dean Gillette

Captain Zamperini had a good starting spot along the rail and got away in mid pack as Evergreen Elite and Kyle Wilfong set the first quarter in :27.3. Sunset Braydon and John DeLong then took over through middle fractions of :55.2 and 1:24.0.

In the stretch Captain Zamperini found the room to get out and get going, pacing home in :28.1 to score the win by one length over Fox Valley Sampson and Sam Widger. Sunset Braydon held position for third in the 1:52.3 mile.

Captain Zamperini was the favorite, paying $3.60 for the win. The six-year-old He’s Gorgeous gelding is owned by Nicole Stewart and Michael Fawcett. Indian Creek Farms bred the gelding, who earned his third win of 2021 in the event. His career best time of 1:50.4 was taken last year as a five-year-old and he now has 11 career wins in 90 starts. He moved his purse earnings to nearly $80,000 with his latest win. He was claimed in early October by Stewart and has won three of his five starts since joining the Stewart barn.

Stewart’s other winner in the Indiana Grand Claiming Series was Shady’s Starlight, also driven by Tetrick. The five-year-old Shadyshark Hanover gelding turned in a gate to wire performance for the win in 1:53.4. Quik and Shady and Braxten Boyd finished second while The Bucket and Joey Putnam finished third.