Stella, the mascot pig that resides in the Mike Hollenback/Lexi Sarkine barn at the Miami County Fairgrounds in Converse, has gone viral. Sarkine spotted her black cat, Lou, sleeping on top of Stella and when Stella got up to walk down the shedrow, Lou went along for the ride. 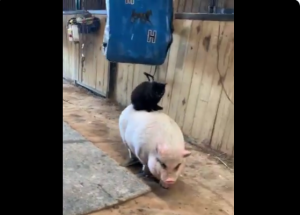 Stella, the pig that resides at the Mike Hollenback/Lexi Sarkine barn at the Miami County Fairgrounds, gave barn cat Lou a ride and the video has gone viral, even appearing on “Good Morning America.”

The video posted by Sarkine on Twitter now has in excess of 150,000 “likes,” 36,000 “retweets” and more than 1.7 million views as of Noon on Wednesday, Jan. 8. As a result of the popular video, several news organizations have picked it up.

Rob Marciano, weatherman for Good Morning America, opened up his weather segment in the eight o’clock hour of America’s number one morning show Wednesday, Jan. 8 with the video of Stella and Lou. The video credited Sarkine of Converse, Ind. in the upper left-hand corner while it aired on the show.

Sarkine was recently featured in the October 2019 issue of the ISA Magazine for her passion of horses and the sport of Standardbred racing. Included in the story was information on how Stella arrived at the Hollenback/Sarkine barn as one of three piglets purchased at the Strawtown sale by Zach and Dessa Miller. Stella immediately bonded with Sarkine’s horse, Nigel Tufnel and the two now are inseparable in their barn.

A link to the video may be found at this link: Stella the Pig and Lou the Cat