Although he wasn’t born and bred in the state of Indiana, retired Standardbred racehorse Re-Elect has served the state for the past 16 years. The Presidential Ball gelding was recently retired from the Indiana National Guard Ceremonial Unit. He was profiled in the recent issue of Hoof Beats. 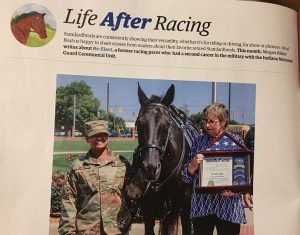 Re-Elect, known as “Reed” at the Indiana National Guard, was joined by former owner Margaret Romano for his retirement ceremony in September 2019. Photo from Hoof Beats

After suffering an injury in 2002, his owners Margaret and Anthony Romano of New Jersey, decided to retire him and heard the military uses black horses for their ceremonial unit. Although their local base was not taking any horses, they placed the Romanos in contact with the Indiana team and Re-Elect soon had a new home and a new name, Reed.

“Reed” served the unit in more than 90 funerals and was retired as sergeant first class and was returned to the Romanos to live out his life at their farm in New Jersey. The Indiana National Guard Ceremonial Unit is based out of Indianapolis.

For the full story, check out the February issue of “Hoof Beats.”