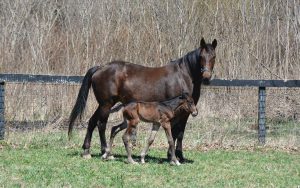 Glide Sally Glide poses with her new foal by Dover Dan, last spring. The USTA just reported an increase in mares bred in 2020 compared to 2019. (Photo by Dr. Alan White)

Indiana is also ranked second for number of mares in the state with 2,334 registered for the Hoosier State. Once again, Ohio leads the way with 2,530 with Pennsylvania ranked third with 2,054.

The Hoof Beats article also mentioned five years ago, foal crops had been going down. The breeding operations seem to be rebounding due to purse structures at numerous tracks in North America.

With the arrival of 2021 will also be the arrival of the new Stallion Directory. The directory went to press in mid-November but due to COVID-19 issues placing delays on the US Postal Service, the arrival of the stallion directory may be delayed in reaching homes. Delays are also being experienced with the ISA Magazine as well as Hoof Beats and other harness-related publications.