Spell Cuteypie turned a gate to wire effort into a winning performance at Saratoga Harness Sunday, Feb. 27. Guided by Brett Beckwith, the Indiana sired trotter scored the win in 1:59.4. 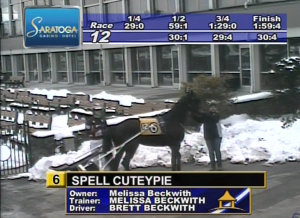 Starting from post five, Spell Cuteypie was one of several horses with intentions of leading the race, but she had the most authority and the other contenders backed off before the quarter in :29.0. From there, it was a pretty evenly rated mile with contenders moving three-wide in the final turn on the half-mile oval.

Spell Cuteypie drifted out a bit in the stretch but had plenty left in the tank as she scooted under the wire by one and one-quarter lengths ahead of Dazzling Lindy and Luke Hanners. River of Denile and Jay Randall finished third.

Spell Cuteypie was the favorite of the field, paying $3.00 for the win. She is owned by Melissa Beckwith, who also trains the four-year-old daughter of Guccio. John Wittmer bred the mare, who was campaigned on the Indiana circuit through the 2021 season before being acquired by trainer Cad Gregory, who raced her at Harrah’s Philly and Yonkers Raceway. She recently changed hands to the Beckwith Barn and is now two for two for her new connections.

Also, a winner on the Sunday card at Saratoga is a horse from Indiana breeding royalty as Bridge Works scored a win in the featured $13,000 Winner’s Over Trot. It was a near identical trip as Spell Cuteypie as Bridge Works and Luke Hanners reached the top just after the quarter in :27.2. The six-year-old gelded son of Dejarmbro kept a good hold on the lead throughout and was a winner by two and one-quarter lengths in 1:56.3. Oh So Pine and Larry Stalbaum were second over Stone in Love and Dan Cappello Jr. for third.

Bridge Works was a $20.20 winner as a longshot in the field. The Michael and Randy Wilt bred gelding is owned by Stephen Picarazzi, Scott Petillo, Darreyl Bullard and Brett Derue, who also trains. It was his first win of the year in his third start of 2022. Overall, he has 20 wins in 97 starts with earnings nearing the $200,000 mark. His career best time was taken last year at Saratoga in 1:55.1.

Bridge Works, an Ohio bred, was the highest priced son of Dejarmbro at the Ohio Select Sale as a yearling in 2017. He brought $53,000 through the sale.