“Hoof Beats” has published a special 2022 Breeders Book, covering the upcoming breeding season featuring stallions from coast to coast. The 300-plus page book includes several statistical pages in the front that highlights several Indiana stallions. The books are now arriving in homes. 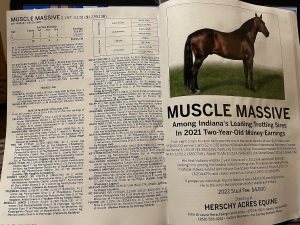 Muscle Massive is one of the stallions with a full-page spread in the 2022 Breeders Book produced by “Hoof Beats” arriving in homes this week.

The special edition of “Hoof Beats” begins with statistics for leading broodmare sires followed by Sires Stakes money winners. In the Indiana category, Dalby Hanover was the leader for the two-year-old colt pace with $200,000-plus total. The Rockin Image was sold for a yearling price of $15,000. The top filly pacer was Trick of the Light (Odds on Equuleus) and the top freshman trotters were Dover in Motion (Dover Dan) in the colt category and M-M’s Dream (Swan for All) in the filly category.

Auction reports were included in the issue, covering all three Indiana sales, Hoosier Classic, Michiana Classic, and the Topeka Yearling. Yearling prices for all the sires were also listed.

Finally, pages featuring stallions are included, offering details on the breeding of the stallion along with performance reports thus for of their offspring.