Somethingbeautiful has a strong pedigree to live up to. The freshman filly is a half sister to the standout Schnitzledosomethin, winner of more than $767,000 with a mark of 1:49.1. But the filly is proving to be just as tough as her older brother. With her latest win in Indiana Sires Stakes action, Somethingbeautiful is four for four this season, and if you count her two qualifying wins to start off her career, she has yet to follow another horse across the finish line. 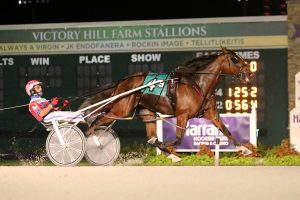 Somethingspecial is now four for four in 2020. Photo by Dean Gillette

Trained by Dylan Davis, Somethingbeautiful was the heavy favorite in the first of two divisions for two-year-old pacing fillies in Indiana Sires Stakes action. Starting from post four, driver LeWayne Miller opted to float out from the gate and allow Ever Rocking and Al Tomlinson to establish the first two stops, passing by the quarter in :28.0 and half in :56.4. By the top of the stretch, Somethingbeautiful had taken over the lead, striding off to a five-length advantage at the finish line. Baci Baci and Ricky Macomber Jr. finished second over Skyway Brittney and Sam Widger for third. Time of the mile was 1:53.0.

In the second division it was Hot Mess Express, another heavy favorite. Hot Mess Express grabbed the lead at the half and never looked back, pulling away to a 1:52.0 win with Sam Widger in the bike. Uncut Gem and Joey Putnam finished second over Sassy Cindy and Peter Wrenn for third.

Jamaica Patton trains Hot Mess Express for Sam Bowie. The Panther Hanover filly is now four for five in her career. Her time of 1:52.0 was a new lifetime mark for the filly, who was a private purchase.