Indiana sired Somebodyslilly scored the top spot in the week’s top pace for females Friday, Dec. 10 at Hollywood Gaming Dayton. The mare, driven by Tony Hall, was favored in the $30,000 event and scored the win in 1:51.4. 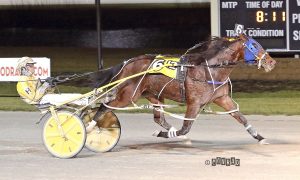 Starting from post six, drawn in that position, Somebodyslilly rallied out early and got the garden spot seat behind early leader Marloe Hanover and Mitchell Cushing. Fractions of :26.0, :55.3 and 1:23.1 carried Somebodyslilly to the stretch drive.

In the stretch, Somebodyslilly moved out and around the race leader, soaring to a two-length advantage at the wire. Stay Gold and Kayne Kauffman finished second over Mildrix and Dan Noble for third.

Somebodyslilly paid $5.60 for the win. The Time to Roll four-year-old mare is owned and trained by Eli Schwartz, who also bred the mare. It was her fifth win of the season and 12th overall in 50 starts. She now has in excess of $256,000 and her career best time was recorded last year at three in 1:50.0. She was timed earlier this year in 1:49.1 at Harrah’s Hoosier Park. Somebodyslilly is closing in on $100,000 in earnings for 2021.

Another Indiana sired winner on the Friday card was Carrot Cake trained by Jace Sundeen. The three-year-old Rockin Image filly, driven by Tyler Smith, sat patiently in the two-hole before finding room in the stretch and earning the win by one length in 1:54.0. Amy L and Hank LeVan finished second over Phelgon and Kerry Roehm, another Rockin Image filly, for third.

Carrot Cake paid $9.80 for the win. She is owned by Ellis Bryant who also bred the filly from his standout pacing mare House of Pleasure, who earned a mark of 1:51.3 and more than $250,000 during her career. Carrot Cake is now four for six in her brief career after not starting at two. The mile also marked a career best effort for the filly.