Somebodyslilly and Michael Oosting knew going into the third leg of Indiana Sires Stakes action Saturday, Aug. 1 they were up against some stiff competition. But, when Priceless, the superstar two-year-old from last season went off stride around the final turn, the scenario drastically changed, opening it up for her to score the win in 1:51.0. 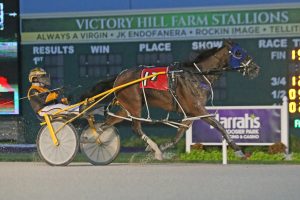 Starting from post one, Somebodyslilly was able to scoot out right behind Priceless and Brandon Bates at the start and ride right along as fractions of :27.1 and :56.4 were set. The tempo picked up around the final turn and when Priceless went off stride, Somebodyslilly was in perfect position to shoot through, pacing home in :26 seconds for the five-lengths win. Kickin Up My Heels and Trace Tetrick closed well for second over a close photo with Classic Country and Sam Widger, who finished third.

Owned, trained and bred by Eli Schwartz of White Pigeon, Michigan, Somebodyslilly paid $8.60 for the win. The Time to Roll filly is now two for four this season and secured a new career best time the week before in 1:50.0. She increased her career bankroll to more than $88,000 with the win.

In the second division of Indiana Sires Stakes action for three-year-old pacing fillies, Mystical Carrie and Trace Tetrick rallied home for the win in 1:50.4. The Tellitlikeitis filly trained by Erv Miller was out early in the mile as Genie Rockwell and Marlin Fry set the pace in :26.2 and :56.2 before moving out again to challenge in the third quarter.

In the stretch, Mystical Carrie turned in a swift final panel in :26.1 to score the two and one-half length win over Seventimesacharm and John DeLong, who closed in for second over Genie Rockwell for third.

Owned and bred by Mystical Marker Farms, Mystical Carrie now has two wins and two seconds in four starts this season. The sophomore filly is closing in on $100,000 in career earnings and recently lowered her career best time to 1:50.2.

Earlier in the night, Majestic Player A, with Sam Widger at the controls, won his 10th straight race in 1:51.4. Trained by Walter Haynes Jr. for owners Brian Carsey, Jeff Fought Racing, and Casey Myers, Majestic Player A earned a new lifetime mark in the race and also eclipsed the $100,000 mark since arriving in the United States earlier this year. The Majestic Son six-year-old is one of four horses in North America with 10 wins this season and leads all of them in earnings.