Each year, trainers have high hopes for their two-year-olds as they prepare for racing season. One trainer that is seeing outstanding early results is LeWayne Miller as his two-year-old Soaring Now is doing just that, soaring to new heights. The JK Endofanera colt is now two for two, sweeping the Johnny Hooker Series with a win in the final Thursday, July 1. 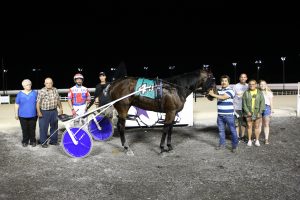 Soaring Now, shown in the winner’s circle with his connections after his win in the Johnny Hooker preliminary, was a dominant winner in the final Thursday, July 1. Photo by Dean Gillette

Starting from post four, several horses in the final had intentions of moving to the front out of the gate. Luckychris, driven by Trace Tetrick for trainer Curtis Rice, has seen great results on the Indiana Sired Fair Circuit this season, including a track record. Stepping up to the pari-mutuel ranks has seen the Luck Be Withyou freshman’s times drop and he was one to challenge for the lead early.

Everything Z Tam and Joey Putnam used their inside post to their advantage and held positioning on the inside at the first quarter in :27.3 while Luckychris was parked and Soaring Now was outside of him three-wide heading around the first turn. Luckychris eventually crossed over to the lead followed by Soaring Now, who had secured the top spot by the half in :57.3. From there, Soaring Now continued to open up on the field, reaching the three-quarters in 1:26.3.

In the stretch, Soaring Now continued to move away from his opponents, pacing home in :25.4 for the win in 1:52.2. Luckychris, who paced home in :26.2, finished second over Incredible Badger, another son of JK Endofanera, paced home in :26.0 to finish third for John DeLong.

Soaring Now, the overwhelming favorite, is now two for two. He is owned by James Miller of Kentucky and was purchased for $6,000 from the Hoosier Classic Yearling Sale last fall from the Luckiana Farm consignment. He is out of the Mach Three mare, Sunflower, who is also the dam of Sammonsletsroll, a son of Time to Roll who took a mark of 1:53.0. He also has a yearling half-brother by Luck Be Withyou.

Soaring Now turned in two qualifiers, both wins, to prepare for the preliminary round of the Johnny Hooker Series. He won his debut in 1:53.2 before winning the final to be undefeated in two starts.

Earlier in the card, Ponda Hawk and John DeLong won the consolation of the Johnny Hooker series. The Luck Be Withyou gelding turned in a gate to wire effort for the win in 1:52.4, a final panel in :26.2. Yourwishisgranted and Jay Cross finished second over Ultra Image and LeWayne Miller for third.

Ponda Hawk is owned by William and W. Patrick DeLong, and Heidi Miller. Pond-A-Acres bred the gelding, who sold at the Hoosier Classic Yearling Sale for $6,000. Roger Welch trains the freshman, who is off to a great start and is now one for two in his career.