So Jam Good and Mickey Holliday turned in a tough performance Sunday, June 19 at Oak Grove Racing. The duo timed their move just right for the win in 1:56.4 as a longshot in the field. 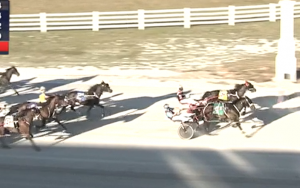 Starting from post four, So Jam Good’s move to the lead was postponed as Bet Diamond and John MacDonald rushed out to secure the top spot in :28.0 with So Jam Good keeping on task, and reaching the lead as the field turned into the stretch for the first time. However, when the field left the stretch for the first time, another horse had taken over the top spot as fellow Indiana sired Girl Giggles and Randy Crisler took over through the half in :57.2 and three-quarters in 1:27.4. Around the final turn, Diamond Diesel and Kevin Wallis had moved up on the outside which gave So Jam Good little option to move out to challenge.

In the stretch, So Jam Good eased out to challenge and once he had the room, he hit another gear, rallying home in :28.4 to score the win by a neck over Girl Giggles. Diamond Diesel finished third. Ronald Best trains So Jam Good.

So Jam Good paid $45.60 for the win. The Jammin Joshua gelding is a homebred and is owned by breeders Darla Gaskin, Stanley Rosenblatt and Ronald Krodel along with Emily Ratcliff. After not racing last year at two, So Jam Good has one win in two starts this season at Oak Grove. He had three qualifiers at Harrah’s Hoosier Park before making his career debut. He is the first foal from the Always a Virgin mare Always an American. She has a two-year-old colt, also by Jammin Joshua, named Oh Hot Jam and a yearling filly by Rockin Image named Rockin in the USA. Always an American is a half-sister to the dam of the great American Girl, who earned more than $1 million during her racing career and took a mark of 1:50.3 at nine. American Girl was also campaigned by the Gaskin Stable.

American Girl started her brood mare career in 2019 and has a two-year-old filly named American Seaside by Downbytheseaside and a yearling filly named Girl Named Captain.