A little less than two hours into the Saturday, March 30 racing program at Harrah’s Hoosier Park, racing was canceled due to inclement weather. Snow blanketed the area with winds added in for tough weather conditions during the 26th season of Standardbred racing at the track. 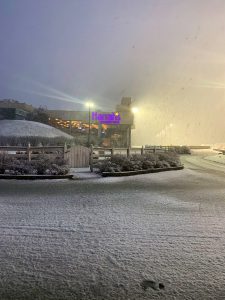 Racing has been very competitive with some great payouts so far in 2019. Only one favorite won in the first six races Saturday, March 30 before the cancellation. This was coupled with Friday’s strong payouts where only four favorites on the 14-race card reached the winner’s circle.

With so many longshots hitting during the two-day opening weekend, the Pick 4 went untouched and will return Thursday, April 4 with a $30,000 guarantee.

In conjunction with the US Trotting Association and the Indiana Standardbred Association, the Pick 4 carryover heading into Thursday is set at a little more than $11,700. The Pick 4 will resume on race three of the Thursday racing program.