Mike Smith, former executive director of the Indiana Horse Racing Commission (IHRC), and Jonathan Schuster, former vice president and general manager of racing at Indiana Grand, were inducted into the Indiana Horse Racing Association (IHRA) Hall of Fame Monday, Oct. 26 at Harrah’s Hoosier Park. A reduced crowd due to COVID-19 regulations was in attendance for the ceremony, which began with several draws for post positions of the Breeders Crown Championships coming up next weekend. 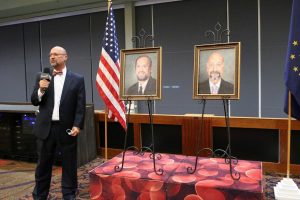 Mike Smith stands in front of the two portraits of himself and Jon Schuster, the latest inductees into the Indiana Horse Racing Hall of Fame. Photo by Dean Gillette

Rachel McLaughlin served as emcee on the night. Trent McIntosh, senior vice president and general manager, provided a special message prior to the induction of Schuster, which was done posthumously.

Halstrom pointed out the final project Schuster was working on at the time of his death, the new paddock area, which is now dedicated in his honor with a plaque. An annual scholarship in Schuster’s name was also implemented in 2020 at his alma mater, the University of Arizona Racetrack Industry Program.

Schuster’s wife, Janie, and his four daughters, Abi Mangone, Rachel Schuster, Hannah Crafton and Chelsea Smock were all in attendance for the unveiling of the portrait that will hang in the Mezzanine at Indiana Grand as part of the IHRA Hall of Fame display.

Rick Moore, vice president and general manager of racing at Harrah’s Hoosier Park provided the presentation for Smith. A well-decorated public servant in Indiana, Moore talked about his five terms as a State Representative before being appointed into the executive director position at IHRC.

Deena Pitman, current executive director of the IHRC, provided some comments before the portrait was unveiled. She noted she had several emotions when Smith was announced as the new leader of IHRC, but those emotions were quickly subsided once he arrived in the position.

“Mike’s biggest gift is making you feel comfortable,” said Pitman. “Those years working with him allowed me to grow both professionally and personally. And, I know if I call, he will always answer the call. He still cares and is happy to help.”

The portrait was then unveiled with Mike addressing the petite crowd.

“To be inducted the same time as Jon (Schuster) is a real honor,” said Smith. “I’m very proud of that fact, in and above itself. I want to thank Governor Holcomb and Vice President Pence for giving me the opportunity with the Commission, and for their support during my tenure.”

Smith went on to talk about moments in racing that stick with him. He noted a race in Chicago before his time at IHRC that featured the best horse in the nation owned by George Steinbrenner. He was able to get Dave Magee to drive his horse. Magee, who is the presiding judge at Harrah’s Hoosier Park, was in attendance for the story.

Smith concluded by thanking his wife for allowing him to be the ultimate commuter and allow him to do the things he loves.

“I very much am honored and it is a pleasure to be here tonight,” concluded Smith.

Moore closed the program by adding commentary on the selection of Smith and Schuster.

“When we met earlier this year to discuss the inductees for the Hall of Fame, it lasted about 30 seconds,” said Moore. “Everyone was in agreement very quickly about Mike and Jon. They are two giants of Indiana, and I’m pleased to call both of them my friend.”