Sly Little Fox has been winning in Illinois. Now the four-year-old Indiana bred is winning in Ohio. Guided by Brett Miller, the trotter scored an impressive win in the first round of the $15,000 Ray Paver Sr. Memorial. 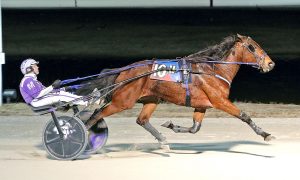 Starting from the second tier in post 10, Sly Little Fox had to bide her time before advancing to the lead, following along in third as Cheesy Hanover and Tyler Smith set the first fraction in :28.0. Once the dust had died down, Sly Little Fox was out and rolling, taking over by the half in :57.1. An outer flow of traffic formed led by Woodside Emileah and Trace Tetrick, but Sly Little Fox held strong through the three-quarters in 1:26.2.

In the stretch, Sly Little Fox drew away from the field by four and trotted home in :28.3 for the win in 1:55.0. Cheesy Hanover finished second while Heavenly Hope and Austin Hanners maintained ground for third.

Sly Little Fox paid $5.40 for the win. It was her second start of 2022 at Miami Valley Raceway after leaving and sweeping the Winter Wonderland Series at Hawthorne. The Swan for All homebred owned by Bambi Fox of Paducah, Ky. is now five for six this year. Mike Hollenback trains the talented mare, who had only one start at two before returning as a three-year-old to win three of four starts. Overall, she is now eight for 11 and boosted her earnings to more than $56,000 with the win in the Paver Series. Her win in the event also marked a new career best.

Sly Little Fox is one of five foals from the Classic Photo mare named On Center Stage, who went unraced. She has a two-year-old by Muscle Massive who will be looking to race this year.